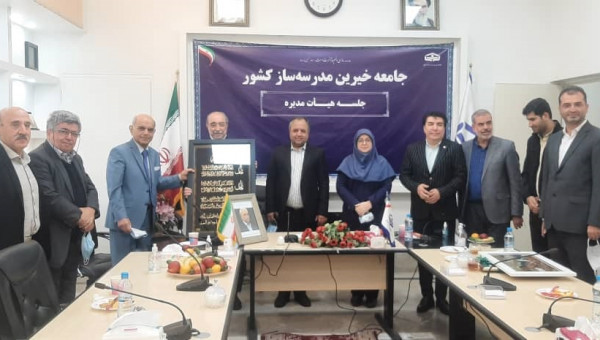 During a ceremony today, Wednesday, November 3, 1400, the valuable services of Dr. Abbas Mosalanejad, a school builder, were appreciated.

Dr. Abbas Mosalanejad in this meeting, emphasizing that, the elimination of ignorance and superstition in society will not be possible except through enlightenment in the construction and development of educational spaces in the country

He continued: "This year, due to the outbreak of coronary heart disease, the school-building charity festival will be held in the form of video conferences and simultaneously throughout the country, on November 8, 2014 at the International Conference Center of Shahid Beheshti University."

He added: "This festival is held with the aim of honoring school-building donors, and it includes issues such as introducing successful donors' associations, talking to influential donors in each province."

Following the meeting, Qalam Chi asked Dr. Mosallanejad to attend the school-building charity festival. Because their words will be effective.

Mohajerani, the Deputy Minister of Development and Support of Public Participation of the School Renovation Organization of the country, also referred to this verse of Rumi and said, "If you have any breath left, except for cunning love, what is the price of whatever the people seek?" The existing has this amount of human and social capital.

He continued: "Last year, donors contributed more than 3,000 billion tomans to the sacred cause of school construction. Donors who donated their property and injected capital, friendship and love into the community."
He noted: I thank God that I am present among you as a good citizen
At the end of the meeting, Dr. Qafli and Dr. Rakhshani Mehr presented a gift of verses from the Holy Quran to Dr. Mosalla Nejad and thanked him.
Dr. Abbas Mosalanejad was born in 1341 in the beautiful and refreshing city of Abadan. He completed his primary education in Mehregan Primary School in this city (he later built another school in the same city called Mehregan 2). He spent his high school years in Alborz High School in Tehran.
Dr. Mosallanejad holds a bachelor's degree in economics, a master's degree in civil engineering, a master's degree in political science, and a doctorate in political economy and a doctorate in strategic policy. He has worked on political economy for many years, especially in Third World countries, and has gained valuable experience in this field.
Mosalla Nejad got married on the evening of the fifth day of the first month of the fall of the year 1, which is the result of their life together, Armita, Armineh and Ario.
In 1996, she established the Mosalla Nejad Cultural Foundation with the aim of carrying out educational and cultural affairs for the public good.
It is worth mentioning: Every year, about "five hundred" elite and talented students are supported by this foundation, and from the establishment of Mosalla Nejad Cultural Foundation until the end of January 2016, about 7,000 students from scholarships They have used this cultural foundation.
To date, Dr. Mosallanejad has participated in the construction of 76 educational spaces, including high schools, vocational schools and student dormitories in most provinces of the country, and currently has 6 educational units under construction.
"First the love of truth, then the love of people, the love of having, the love of saying, the love of good, the love of happiness, the love of knowledge, and finally the love of success are my motivations for being," he says. And it is a continuation of life.
The community of school-building benefactors of the country wishes success and health to God for this benevolent benefactor.
Nazakat Allahyari